I had purchased several seeds of Byblis, also known as rainbow plants. Of these, Byblis liniflora and Byblis guehoi arrived on the 23rd of Jan 2017. I sowed the byblis liniflora seeds immediately into sphagnum moss (see end for growing conditions) and soaked the Byblis guehoi seeds in Gibberellic acid for a day and sowed them on the 24th. Two byblis liniflora seeds to a cell and one byblis guehoi seed per cell (no particular reason other than the number of seeds I had). By the 29th, I had germination! WOW. That was fast. I was expecting to have to wait for weeks. While several seeds of both types were showing tiny specks emerging, ranging in color from white/cream to a pale green, I could only get a decent photo of a couple of byblis guehoi seeds germinating that seemed to be slightly bigger than others. So here they are. 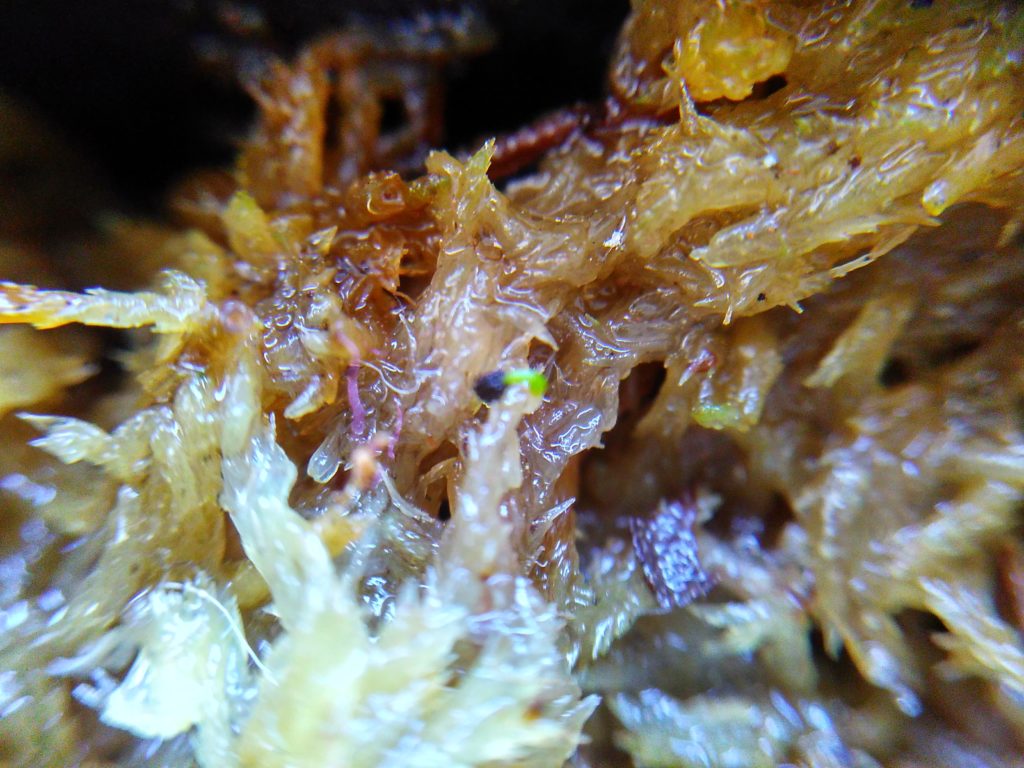 This was on the 29th Jan. Now it is three days later, and on the 1st of Feb, 2 byblis liniflora seeds that had bare specs of pale green hinting in the name of germination are already free of their seed coats.

They are really tiny. Perhaps 2mm or so in size, but they got upright over the course of the day and now look like seedlings. What I find amazing is that miniature as they are, they already have very tiny tentacles with very tiny droplets of dew!!!

On the other hand, the byblis guehoi from the first image….

Well, it is taller. At least 4mm, likely 5mm or more (tough to actually measure in there) and it is more upright, but it is still… emerging. I nudged it very gently to see if the seed coat had actually come off and it was a matter of falling off, but nope. It is still quite firmly attached. The seedling is not done emerging. Reminds me of the process of birth – which it is. You see a newborn and wonder how all that fit in there…

Right now, it is just looking like a stalk. There will obviously be two cotyledons, like the other seedling, but they are either held so tight together by the remaining part in the seed so as to seem to be a stalk, or this is really the stalk and the cotyledons are still to emerge. In either case, it is quite evident that the byblis guehoi promises to be quite a bit taller than the byblis liniflora – if these baby steps are any measure.

I have put the seeds in individual cells in long fingered sphagnum that has been well rinsed and is “on the verge” of becoming alive. My previous attempts at growing carnivorous plants have taught me that in our climage, they really do better in live sphagnum, which protects them from the heat come summer as well as provides some humidity with the constant evaporation. However, pure live sphagnum tends to grow a bit fast and smother seedlings, so what I’ve started doing is using long fingered sphagnum that is dried – but not completely dry, so over time it definitely comes back to life, but not fast enough that the seed can’t get tall enough first. This is dried sphagnum that will generally show a few green stems immediately on being hydrated (which I remove to the live sphagnum culture). As it remains moist, over a period of days, weeks, it slowly gets greener (some of this will be algae) and starts sprouting. I figure it is the best of both worlds.

As far as the potting mix goes, both of them have identical conditions. However, my balcony, where they rest is on a slight slope and the side with guehoi is placed toward the higher end so that the tray dries out slightly earlier on its side than on the side of the liniflora. I’ve done this with some success with other plants which prefer more or less wet conditions than their companions and it is a good use for the sloping floor (which I’d otherwise have to compensate by raising the tray on the lower end a bit so that it is level). I did this because all the reading on the internet so far seems to indicate that byblis liniflora seems to like wetter conditions than byblis guehoi.

The trays are open and get good air circulation and about 4-5 hours of morning sunlight. I suppose I could cover them, but every time I’ve covered seeds, I’ve had problems with fungus, damping off and rot – I think something about our climate (warm, humid). So this time I’m keeping them airy.

That’s about it. I can’t think of anything else I did specifically. Feel free to ask away in the comments.

Though of course, germinating these is just part of the battle, and the real war is keeping them alive beyond the seedling stage.

2 thoughts on “Byblis liniflora and Byblis guehoi seeds are germinating!”

To know when I list new items
I have no time to spam you.
Go to mobile version