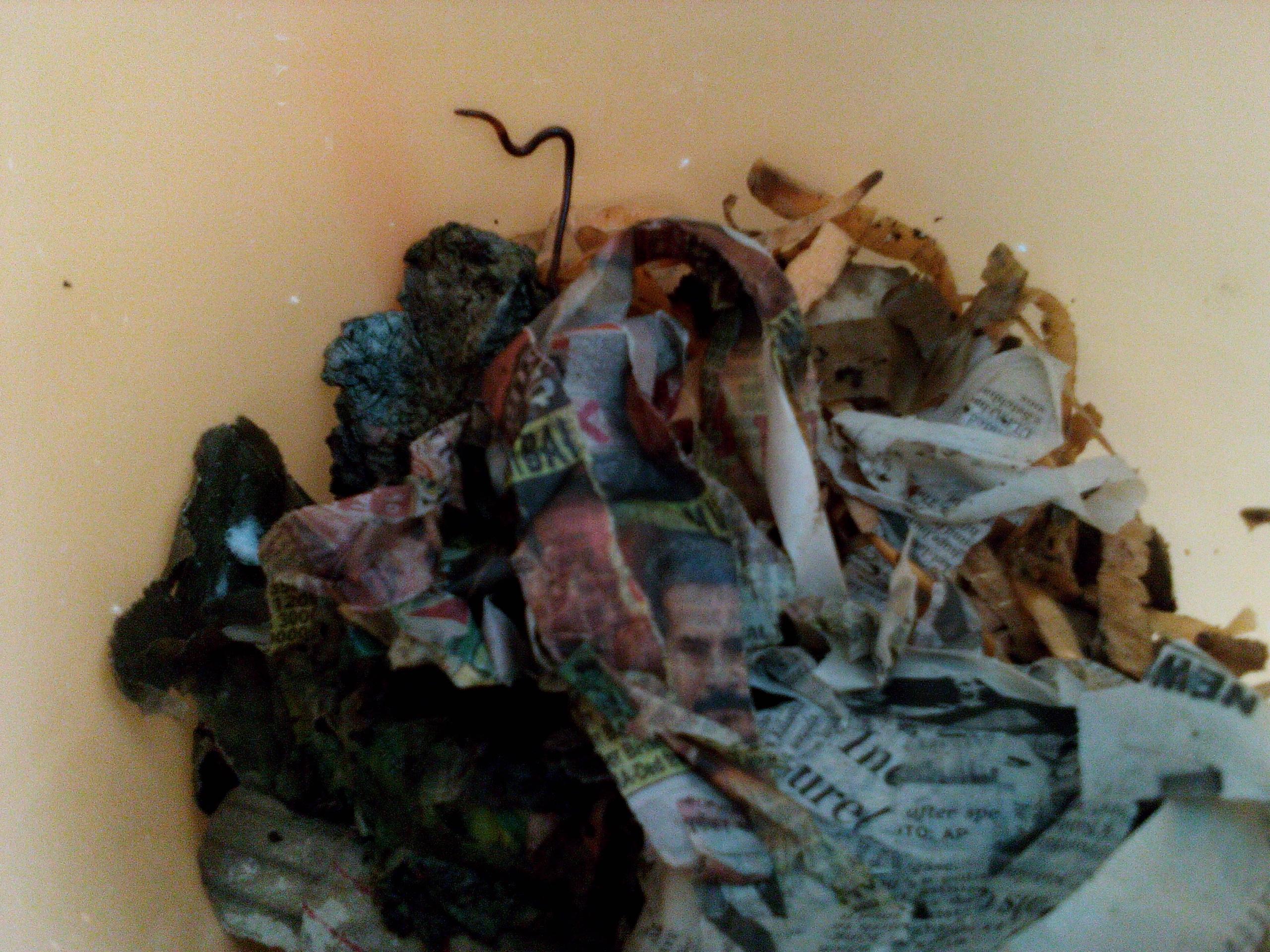 I have always been interested in composting and having my own home now allows me the freedom to get into all these whims and ambitions. There are plenty of tutorials on starting a worm bin. All of them assume you have the worms. But what if you don’t?

I could probably go to the city and find some vermicomposter and buy worms, but I don’t have the time for that at this stage and traveling with Nisarga is complicated at the best of times. I was not willing to wait (good things happen to those who DON’T wait long enough to lose a dream).

One thing was certain, given enough time, compostable materials will compost. No matter how well or badly I do it. Complete disasters can always be trashed.

First I made the worm bin.

I too a garbage bin with the kind of lid that raises when a foot pedal is pressed. Cheap and convenient, though I guess any could be used. The dark shadow in the bottom is some cardboard.

I have punched holes in the bottom and sides of this bin for drainage and ventilation. I found it easier to do by heating a thick needle – the kind you use to sew jute sacks, particularly since I don’t have a drill.

Then I put some wet cardboard in. (I took the photos at this stage, which is why you see the cardboard in previous photos).

Now was the tricky part. This had actually happened while I was living in my husband’s home and dreaming of this place. I was planning a bin and had started a very small one in a small plastic box using “wild” earthworms.

I didn’t have any worms, there were no easy places to get worms nearby, there are no suppliers selling online to deliver in India, and the few vermicompost sellers I could convince wanted a thousand rupees for a kilo of worms. No can do. It would completely defeat the purpose of composting, if composting at home was more expensive than purchasing several years supply of vermicompost.

So, in the great Indian tradition of jugaad (closest meaning being creative solutions), I tried alternatives. I had vermicompost that I had purchased. I threw in a handful. Then I tried to identify and specifically pick out cocoons from it to add. Then the other good news is that it is monsoon here, and the first really serious showers had just happened. There were earthworms on the road waiting for me to rescue them from cruel cars.

If the cocoons hatch, it will be very good. The assumption being that cocoons found in professionally sold vermicompost will come from critters that eat and poop efficiently enough to have quantities that can be sold.

So I had this box of “worms” ready for this environment.

Normally, I’d have prefered to let my worm bin settle and let some food rot in it in some place before I put the worms in, but this was the celebratory first day, so something suitably momentous had to be done. So, I dumped my small worm bin into this larger one – in one place, so that the comfortable ingredients were all in one place in a “comfort zone” for the worms that was already comfortable, while the rest of the bin aged a bit. Then I covered it up with shredded cardboard and newspaper.

Then I put in more shredded newspaper and cardboard till the bin was almost full to deter pests from finding the earthworm food.

I have no idea what is going on in the bin at this point. It is tempting to keep checking, but I guess when they say keep the worm bin safe from pests, they also mean me. So I satisfied my itch by reading up on vermicomposting, and writing this post and letting the earthworms do their thing.

I will update when there is anything to update, but the hope is that the cocoons hatch and/or the local earthworms settle and reproduce.

2 thoughts on “Starting a vermicompost bin without worms”