Aloe Vera plants for sale in India. These are robust. If you would like some old potting mix to be added to your shipment, just leave a message when placing your order. No extra charge.

I have several aloe vera plants for sale (including two giant 3 foot big aloe veras to spare. All these are grown off my main large plants. They are strong, healthy plants and the pups have grown to a robust size attached to their mother (commercial nurseries often separate small pups that are barely a few inches tall).

This is a useful plant with many soothing and medicinal properties which you should probably google up if interested. Excellent for skin, helpful in soothing burns and the juice can be taken internally to reduce intestinal worms or for weight loss (not maing the claims here – describing some of the uses claimed for this plant on the internet as well as traditional wisdom).

Caring for this plant is a breeze. You probably get awards somewhere if you can kill it short of tearing it apart or using herbicides. Heck I’ll replace yours for the cost of shipping if you manage to kill it.

How to care for an aloe vera plant

Remember, this is a succulent. It has food stores within its flesh and the aloe vera plant is capable of delivering great insights on how effective this can be. I’ll ship the plants to you bare root, because it is tidier like that and the plant doesn’t care (contrast this with the fifty kinds of finicky instructions for handling drosera burmanii‘s touchy roots…). If you like, leave a note while ordering, and I’ll add a bag of potting mix to your order for no extra charge.

When you get the plant, clean it if necessary and put it out in the shade to recover from travel. Just let it breathe and get some light and rest. In the meanwhile you can get its pot ready.

Pot it up in well draining soil. Sand/gravel is good, but you can pot it up in straight cocopeat if you wish, as long as you remember that cocopeat is more water retaining than sand or gravel and reduce your watering frequency appropriately. Aloe vera doesn’t like being constantly wet. Though it is a forgiving plant as long as your soil drains fast (meaning water should disappear quickly into the soil and excess should immediately drain out from the bottom). Don’t worry about hurrying to pot an aloe vera if you don’t have your materials ready. I’ve once kept an aloe vera plant completely outside on the balcony – no pot at all, roots bare to the air – for several weeks. It won’t get any bigger, but it won’t die either. Mist the roots occasionally or something till you figure out the pot. The giant in this photo is sitting in maybe 6-8 inches of used potting soil. Like I said, almost anything goes as long as it drains fast.

Do you want to grow giant aloe veras that eventually set flowers? In that case use a large container. Other than this one reason, always opt for a container that only has a little more space than the roots of the plant.

Aloe Vera tends to grow to fill the space of its pot in root size and then it starts sending out pups. Pups are small aloe Vera offshoots that grow at some distance from the mother plant You can leave them as they are to fill the pot with a cluster. If you intend to grow them into separate plants, don’t separate them in a hurry. Wait for the pup to get 5-6 leaves. It doesn’t take very long, but once they are there, separating them from the mother plant has little effect on their growth. If you separate small pups out, they will struggle to survive till they have established a proper root system and have several leaves growing (enough surplus energy stored to get through adversity). In my experience, pups separated too early also have a sluggish growth overall for quite some time – even after they are no longer at risk of death. Once the pups are over half a foot tall and have more than 4-5 leaves, you can separate them by severing the piece of runner root that connects them to the mother plant.

In the main photo on top, there are about 4-5 pups growing in a small four inch pot. There is no soil. Just those pups stood in the pot like flowers, except there is not even water. I occasionally run the water through and it wets the root for a while and them being crowded keeps the roots from drying, and it seems enough to keep them happy – though they won’t have the rapid growth of a properly potted plant. I find it a useful way of holding on to pups as back up plants without letting them grow into space consuming giants.

Aloe vera doesn’t mind being crowded in its pot. However, as the plant grows bigger, it can get top heavy and if in a relatively light pot, there are the chances that the pot can topple over. Some ways to counter this would be to use more sand and less “light” materials like perlite in the potting mix. Another could be to use a heavy ceramic or earthen pot. A quick and dirty fix of simply wedging a smaller pot against other things so it can’t topple works as well if you can be trusted to not move those other things around in a moment of forgetfulness.

Aloe Vera prefers a bright place, but doesn’t necessarily need full sunlight. A couple of hours in the morning is good enough. Plants also grow just fine without direct light. If the light the plant gets is at an angle – window or balcony, etc – occasionally turn the pot around 180 degrees.

General rule of thumb is that you water the pot when it starts getting dry. Once a week should be more than enough for most plants unless you have one that gets a lot of direct sunlight and is in a very low water holding medium like say…. gravel. If you forget to water, Aloe Vera is not going to wilt on you. You can go on a trip for a month or two and not worry about who waters your plant. But for a routine schedule that keeps the plant growing at a good pace so that you have all those new and plump leaves being produced to extract gel from… Watering when the soil starts to dry out is good. It keeps the plant growig fast instead of tapping into its reserves for energy. I suppose an occasional fertilizing would also be nice. I haven’t really fertilized my aloe veras. Frankly, I don’t particularly do much for them. They are often potted in used up soil from other plants, which seems to have enough nutrients for aloe vera.

How to save a rotting Aloe Vera

It happens on occasion. Someone waters an aloe vera daily and thoroughly, the pot doesn’t have good drainage…. the plant starts to look all dark and limp. If you let this go on for too long, the plant will eventually die. But mostly, it can be saved. Take it out of the pot and set it in some shaded corner somewhere. It should get light, but not direct sun. Alternatively, you can set it in barely damp potting mix if you can trust yourself to not overwater again. At some point several weeks later, you may notice with surprise that it is still alive. Put it back in better growing conditions and it should resume growth. 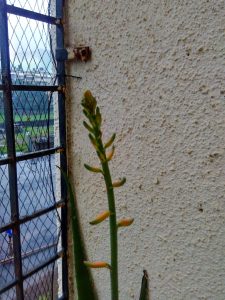 Once you have one plant, you shouldn’t need to buy another, if you grow it with some care. Aloe Vera is very easy to propagate. Articles on the internet seem to say leaf cuttings work. I have not managed to get them to work. Any plantlets that sprout grow slow and usually die on me and it is an utter waste of time. It is far easier to keep your aloe vera growing and simply wait for it to grow offshoots. It does. Very easily and almost constantly in good growing conditions. Alternatively, you may grow a plant to flowering size (by then you will already have lots of pups), and pollinate the flowers by hand to get seeds, as aloe vera flowers release pollen before the stigmas are receptive, and therefore can’t self-pollinate. I prefer propagating from the pups and have not bothered with collecting seeds so far. The pups are so easy, there really doesn’t seem good reason to try anything else. And I’m saying this as someone with enough spares to sell.

To get more plants from pups, keep the aloe vera plant in a container that is just big enough for its roots. As the roots fill the container, it will start sending out small plantlets at a small distance. Let those plantlets grow to at least 5-6 inches and have 5-6 leaves before severing from parent for best results. I often leave the plantlets next to the mother till they are a fairly good size – 8-10 inches or so.

You can always email me for any advice you may need.